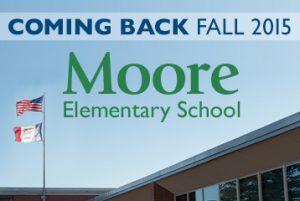 Moore will be the first IB school in northwest Des Moines, allowing DMPS to provide students and families access to this world class curriculum from elementary school, through middle and high school. Both Meredith Middle School and Hoover High Schools, which Moore students would go on to attend, are IB World Schools.

Moore first opened in 1950, serving the students of Beaverdale and northwest Des Moines for more than half a century.

Due to declining enrollment, Moore was closed as an elementary school in 2007 and began a new role for the school district, first as a “swing school” to provide a temporary location for other schools being renovated and most recently as the location for Scavo High School.

However, thanks to increased enrollment in the district and population trends in the community, Des Moines Public Schools is re-opening the newly-renovated Moore Elementary School beginning in the 2015-16 school year.